Harriet Jane joined One For Sorrow in November 2020, sourced by Mark Weatherhead. Mark has been interested in the paranormal for a long time and decided the time was right to add an extra member to the OfS Team. Harriet Jame sits in Marks Studio Office, and is reported to have a spirit attached, a middle aged female called Karen. Below is the information that we have about her from her previous owner…

We have a haunted style doll which one of our previous practitioners had been using to practise spirit attachment within our local spirit circle. The reason I say previous practitioner is due to the said person belonging to another group which also practises dark arts/ demonic worship which we do not condone. The doll itself has been in storage for around a month since the departure of the previous owner and has been with many other items we use on a regular basis. 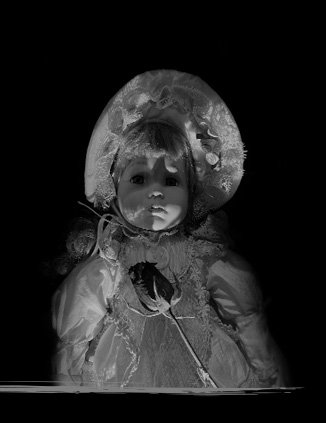 Reason for sale is a move of premises of our spirit circle requires all items to be collected and we do not feel comfortable having this particular doll within our new facility.

This particular doll has been in storage for some time and only recently I have been using equipment to gauge any activity from this doll as it stood out as the most active vessel from a selection I had chosen. I have given this doll a great deal of attention and done some fruitful work over the past two months or so with her, it appears the more I have worked with her the more activity I have received. I have been experiencing spirit lights, disembodied voices although no actual EVP?s, movement of objects within adjacent areas to Harriet and the usual sounds of knocking/ scratching which I have never found overly malicious. She has also fallen over twice which wouldn’t normally be of any surprise however she has a stand attached, I?m not saying this is paranormal just odd. This doll is missing the tip of her finger however this was not through storage and appears to have been done some time ago, I can only hope not in any malice.

Most of the dolls owned by the original practitioner have been of a dark nature however I have grown rather attached to this spirit who I believe is of a middle aged female named Karen and I find her playful and seeking acknowledgement however I may be being drawn in by a malicious. I have given her this name myself through what I believe to spirit broadcasting to me, I have only done solo work with her therefore I have not used a spirit board to attempt to gain any further details which I would advise.

Complete the below to get all our creepy updates!
PreviousOne for Sorrow policies for Covid-19
NextTattoo Artist Wanted

One for Sorrow Tattoo Dismiss